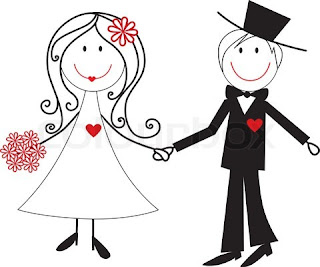 This growing skepticism about the marriage institution is associated with changing attitudes and beliefs about the definition of “family”:

• About 34 percent of Americans called the growing variety of family living arrangements good for society, while 32 percent said it didn't make a difference and 29 percent said it was troubling.

However, before we allow the vast array of alternative “family” groupings to prejudice us against the surpassing viability of the traditional marriage, I think we need to take a look at some statistics. In The Case for Marriage, Linda Waite & Maggie Gallagher assemble some impressive figures:

• HEALTH: “Both married men and married women feel healthier that those who are divorced, separated, or widowed, according to research. In their study of the health of men and women nearing retirement age, Waite and Hughes found that wives were about 30% more likely to rate their health excellent or very good than the same-aged single women were and 40% less likely to say their health is only fair or poor. Husbands showed similar advantages over unmarried men. Married men and women are also less likely than singles to suffer from long-term chronic illnesses or disabilities.” (49)

• SUICIDE: “Married men are only half as likely as bachelors, and about one-third as likely as divorced guys, to take their own life. Widowers face about the same suicide risk as divorced men do, except for younger widowers who are up to nine times more likely than married men to commit suicide.” (52)

• MH: “40% of the married said they are very happy with their life in general, compared to just under a quarter of those who were single or were co-habiting. The separated (15% very happy) and the divorced (18% very happy) were the least happy groups. The widowed were, perhaps surprisingly, just about as likely to say they are very happy as singles or as co-habitors—22%.” (67)

• SEX: “Married people have both more and better sex than singles do. They not only have sex more often, but they enjoy it more…Only cohabitors have more sex than married couples, but they don’t necessarily enjoy it as much.” (79)

• DV: “A large body of research shows that marriage is much less dangerous for women than cohabitors…1987-88 National Survey of Families and Households: married people are much less likely than cohabiting couples to say that arguments between them and their partners had become physical in the past year (4% of married people compared to 13% of the cohabiting).” (155) “Cohabiting women are 8 times as likely as to be unfaithful than married women.” (157)

• CHILD ABUSE: “A preschooler living with one biological parent and one step-parent was forty times more likely to be sexually abused than one living with two natural parents.” (159).

• IMPROVEMENT: “86% of those who rated their marriage as unhappy in the late eighties and who were still married five years later said their marriages had become happier.” (75)

• “COHABITATION [trial marriage] provides some but not all of the same emotional benefits of marriage, yet only for a short time and at a high price. Breaking up with a live-in lover carries many of the same emotional costs as divorce but happens far more frequently. People who are cohabiting are less happy generally than the married and are less satisfied with their sex lives. In America, long-term cohabiting relationships are far rarer than successful marriages.” (74)

Interestingly, many talk approvingly of the “wisdom” of cohabitation as a means to test future compatibility. The New Oxford Review also reports that,

• “One in ten survives five or more years…The divorce rate among those who cohabit prior to marriage is nearly double (39% vs. 21%) that of couples who marry without prior cohabitation.”

• “Cohabitation is bad for men, worse for women, and horrible for children. It is a deadly toxin to marriage, family, and culture.” ()

It seems that the Bible might have a point:

• And the LORD God said, "It is not good that man should be alone; I will make him a helper comparable to him." (Genesis 2:18)

Unsurprisingly, Jesus endorsed the Bible’s teaching to retain the marriage union at all costs, acknowledging that marriage is part of God’s wise and gracious design.

• "Haven't you read," he replied, "that at the beginning the Creator 'made them male and female' (Genesis 1:26), and said, 'For this reason a man will leave his father and mother and be united to his wife, and the two will become one flesh' (2:24)? So they are no longer two, but one. Therefore what God has joined together, let man not separate." (Matthew 19:4-6)