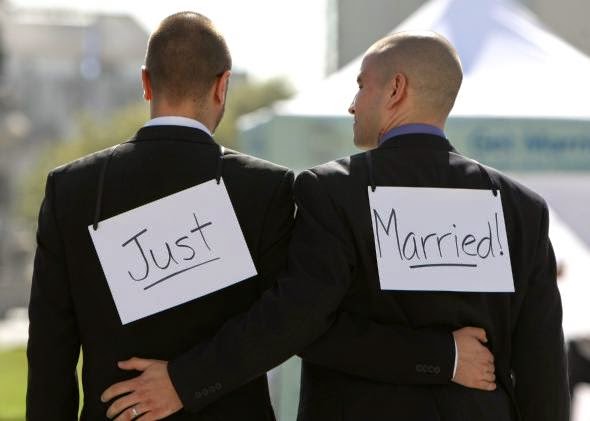 (Menghadapi Paksaan Dari Kaum Gay : Berjuang atau Menghindar)
What should we Christians do when a homosexual demands services? This has become a career-threatening choice, as the National Review writes:

Christian-adoption and foster-care agencies have been forced to stop providing those services because they object to placing children in same-sex households. Other cases include a photographer, a baker, a florist, a bed-and-breakfast, a t-shirt company, a student counselor, the Salvation Army, and more. In each of these instances, there were plenty of other businesses available that were willing to provide similar services.

Newsperson, Kirsten Powers, a new convert to the Christian faith, does not see a problem here for Christians:

It’s not clear why some Christian vendors are so confused about their role here. … Christianity doesn’t prohibit serving a gay couple getting married. … Christians serve unrepentant murderers through prison ministry. So why can’t they provide a service for a same-sex marriage?

This is a much debated issue today among Christians as we seek to faithfully navigate the new paths etched out by our culture. It raises the question, “WWJD” – “What would please our Savior?”

For one thing, we are not free to violate our conscience even if we are mistaken about the normative will of God:

So whatever you believe about these things keep between yourself and God. Blessed is the one who does not condemn himself by what he approves. But whoever has doubts is condemned if they eat, because their eating is not from faith; and everything that does not come from faith is sin. (Romans 4:22-23).

Scripture argues that we have to be true to our conscience. Anything less is sin! Even if we violate what we mistakenly think is wrong, we have violated our relationship with God.

This is all fine, but what if we see a gay person bleeding to death. Are we not supposed to do anything about it if we think that aiding him is wrong? Admittedly, there are principles of truth and objective morality that must take precedence. Jesus’ Good Samaritan aided his enemy, the Jew.

However, this type of case is not at issue here. Instead, it’s usually a matter of baking a cake or photographing a gay wedding. Should the State compel the Christian to comply, or should our Constitutional right to freedom-of-religion preside?

Powers draws a false analogy between Christians ministering to murderers in prison and baking a cake to celebrate a gay marriage. These two are not equivalent. Ministering to a murderer is not the same thing as partaking in the murder or even celebrating it. It’s a matter of ministering to the person and not his actions. However, baking the cake for the gay wedding is supporting something Scripture finds unsupportable.

Similarly, many Christians readily bring meals to gay HIV patients. However, there is a difference here. Bringing meals does not contribute to an act that Christians regard as wrong. In contrast, helping a gay connect with other gays for sexual reasons would. In such a case, this activity would cause the Christian to share in the sin, something we cannot do, and it is something we cannot allow the government to force us to do. Many will choose prison over compliance.

Powers should not be surprised by this reasoning. Would she sell gasoline to Hitler to fuel his tanks? Would she sell guns to a drug dealer knowing that they will be used to kill the innocent? To do such would be to share in their sins.

Would she rent out a room at her B&B to a pedophile and his prey? Wouldn’t this represent complicity in his sin? Of course!

Where do we draw the line? Some cases are difficult; some aren’t. Should the Christian T-shirt maker be required to print a T-shirt reading, “Christ Kills” or even “Go Gay Pride?”  I think not! Such coercion would undermine the integrity of our nation and reject the very principles that had once made it great. It would also violate our sacred relationship with our Savior.

Meanwhile, in other Western nations, churches are being compelled to open their doors to gay marriage. This cannot be allowed! Not only would this represent of violation of the One we adore and His love for His church, it would also divide the church! I pray that we might see what is at stake!